It seems only fitting that someone who talks the talk and walks the walk, design the skirts for it too. After all, if you have a job to do, you wouldn’t want any wardrobe malfunctions or discomforts to disrupt you, something full-time Lawyer Rebecca Pierluigi had in mind when redesigning the classic pencil skirt.

Fashion and law are two worlds that don’t often meet, but Rebecca understood the need to introduce them. A love for skirts coupled with the frustration that came with impractical corporate wear, lead her to create RP skirts. After a number of tests and activities, Rebecca designed a slick skirt with an inbuilt system that stops it from twisting and moving. Despite what seems like a long jump into new territory, fashion design is not entirely unfamiliar to her, but RP Skirts was still a challenge. “I use to sew in high school and made the costumes for a school play as well as some skater skirts for my sister,” she said. “However, I had not taken on a huge sewing or fashion design project for approximately 12 years when I started designing the RP Skirt.”

Rebecca read around 30 books on business and fashion and talked to anyone who was willing to share their experience with her. She navigated the new landscape eagerly and found the change in view stimulating. “Working as a lawyer is very analytical and so it was quite refreshing to use the creative side of my brain for a change,” she said. The challenges came with the details of launching a start-up rather than designing the skirt. “My biggest challenge was finding a way to market that didn’t make me feel sleazy, trying to avoid that used car salesman vibe,” she said. “As a lawyer, I honestly believe the person I was meeting with needed the particular service I was offering and so I worked out ways to transfer those types of discussions online for RP Skirts.”

Rebecca is focused on the skirts with the Kickstarter campaign already launched but is planning on introducing other pieces down the line. “I would love to first expand the range into other styles of skirts including A-lines and Godets,” Rebecca said. “It would also be amazing to expand into shirts and jackets so I can offer a complete and high-quality workwear solution.” 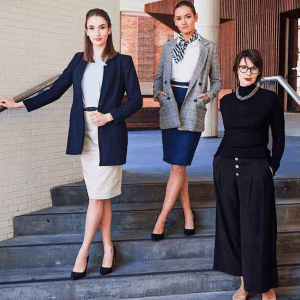 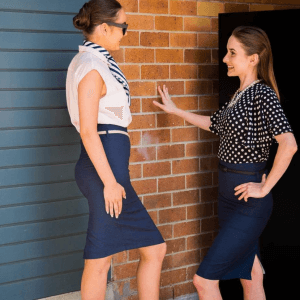 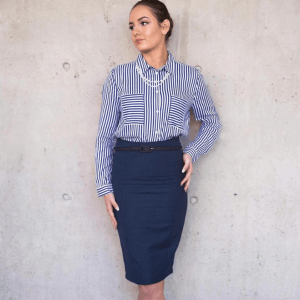