At 21 years of age, Madeline Stuart is a worldwide phenomenon. She is a powerful advocate for inclusiveness and diversity in modelling with more than 850,000 social media fans following her successful campaign to become the first professional model with down syndrome.

Madeline’s story captured the world’s attention from the minute it went viral, with nearly 7 million people following the inspiring weight loss journey that kickstarted her modelling career. Her ambitious goals and dedication had her go viral twice in 2015 and again in 2016. Now, she has translated that initial success into modelling engagements. Madeline is about to embark on her first major Australian partnership with P&O Cruises and will be in Melbourne as the ambassador for the Fashions on the Sea cruise and will be attending Melbourne Cup Day. P&O are the first major Australian company to embrace working with a model that has down syndrome. Madeline will be joined by her mother Rosanne Stuart who will partake in a live Q&A about her daughter’s rise to fame and how she is changing society’s perceptions of people with disabilities one photo shoot at a time.

P&O Cruises President Sture Myrmell said the cruise line was honoured to have Madeline Stuart headline this year’s ‘Fashion at Sea’ catwalk show which is now in its 49th year. “This year we’re extremely proud to host Madeline Stuart and to launch a first-of-its-kind fashion campaign that promotes diversity and inclusion on and off the fashion circuit. P&O Cruises Australia is a contemporary brand and this year’s show supports the essence of modern Australia.”

Madeline also recently returned from the United States having walked in 17 shows in 14 days at New York Fashion Week. She has taken part in the Diesel ‘wear your hate’ campaign alongside other high profile international celebrities including Nicki Minaj and Lindsay Lohan. Madeline wrote about the campaign on her Instagram page, stating, “The more Hate you wear the less you care.” 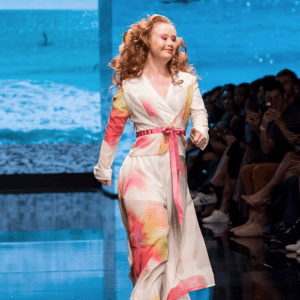