Song Hotel Sydney, Australia’s only profit for purpose hotel has launched nine themed rooms dedicated to successful Australian women. Run by YWCA Australia who have supported women, children and communities for 130 years is honouring successful women across music, journalism, conservation, activism and acting in the rooms.

YWCA Australia Interim Director of Communications Vanessa Beggs says the hotel is proud to be dedicating the rooms to women whose work aligns with its mission. “All profits made from Song hotel are directed to programs that focus on women’s empowerment and leadership, eliminating violence against women and their children, and providing a safe harbour,” she explains. “Singing the Praises of Inspirational Women is a new chapter in our mission, paying homage to women whose talent, drive, individuality, and collaboration with others to build a better community for all represent the values of YWCA in the 21st Century.”

The new Women’s Wing contains The “We Paved The Way” Room – celebrating the history of feminism in Australia, The Sia Room; The Missy Higgins Room, The Nakkiah Lui Room, The Deborah Mailman Room, The Lee-Lin Chin Room, The Bindi Irwin Room, The Sally Rugg LGBTIQ Pride Room and The Tina Arena Room. All of these women have played an active part in the design of their rooms. LGBTQIA activist Sally Rugg’s room is rainbow bright, while Bindi Irwin’s room features a large koala canvas wall and small jungle of plants. The young conservationist has also donated two Australia Zoo shirts and hats for the wardrobe so that guests can pose for selfies during their stay. The design and fitout of each rooms was completed through the in-kind donation of goods and services. 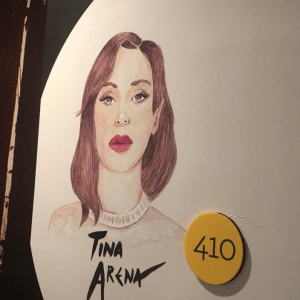