Taking On A Shitbox

Mother daughter duo Verity and Erica Hodgkinson love a good challenge. Driving a true ‘shitbox’ from Perth to Sydney via Uluru in 10 days was exactly the kind of adventure the pair love to tackle head on (or bonnet on, more like).

Now in its 10th year, Shitbox Rally is one of the largest community led fundraisers for the Cancer Council in Australia, where participants raise at least $5000 before driving a car on its last legs across the Nullarbor Plain.

Shitbox veterans Verity and Erica say they are two peas in a pod. Both ex-Cancer Council employees, they have seen first hand how the money raised funds ground-breaking research that would otherwise go unfunded. “Like many people we have an increasing number of friends being diagnosed with cancer and the good news is that many of them survived because of the money invested in research but not all have been so fortunate. We want to do as much as we can to increase those odds,” said Verity.

The pair’s positive outlook and lust to support the cause is fueled by a personal experience. At age 21, Erica was diagnosed with skin cancer, and directly benefited from research by the Cancer Council. “We recently lost a very close friend to ovarian cancer who got some comfort knowing that her participation in the INOVATe Study (Individualised Ovarian Cancer Treatment Through Integration of Genomic Pathology into Multidisciplinary Care)  will benefit others. This incredible selflessness is what keeps us going and determined to keep the cash flowing to Cancer Council,” said Verity.

The mother daughter team are looking forward to taking on their second rally, despite what the men in their lives have to say. “There was some concern from the men in our lives that we won’t manage an outback rally,” said Verity. “This concern is partly because the only way we have ever fixed a car previously had been with a credit card or by calling the NRMA and never for a car worth less than $1000. The Shitbox Rally is so well organised that it made us look like experts last year.”

The pair are “pretty confident” and have learned valuable skills in last year’s race that are sure to help them this year, like using tennis balls to buoy up the ailing suspension. But the community aspect is the duo’s favourite part. “Everyone has their strengths and are happy to share those skills.  It is a great reminder of what can be done when we all band together. Without the support of the rally community, particularly people that can change tyres, we would not be able to take part in the rally.”

But Verity and Erica can certainly fundraise, being named among the top earners from last year’s event. “We were very moved last year by the effort that remote towns, often under stress themselves from the drought, would go to feed, water and entertain us.”

Nicknamed Car Dash Agains, Verity and Erica will be driving their 1999 Toyota Camry station wagon, also known as Kimeee, across Australia. “Preparation of Kimeee has been a community effort with Rhino-Rack donating roof racks  and close friends helping to keep Kimeee roadworthy. Erica is in charge of the bespoke paint job and if last year’s effort is anything to go by we won’t be missed. We are currently trying to work out ways to convert a garden rake into “eyelashes” for the headlights.”

They have a small message for all those thinking of donating or getting involved, “whether you take part in the rally or donate you will be making a difference to someone with cancer and that is really important”. 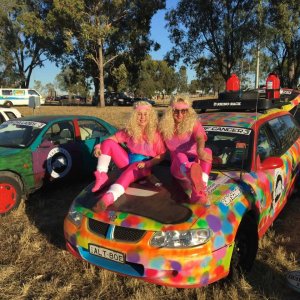 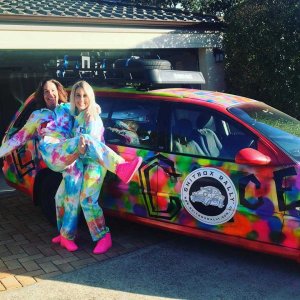 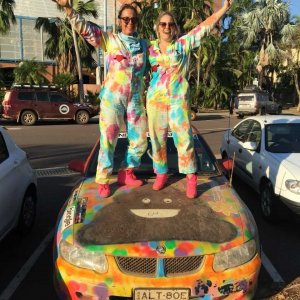