Born and raised in Hamburg, Germany, Frederieke Meishammer has been a long time Oktoberfest aficionado. In the lead up to this year’s event, she recalls her first experiences with the German tradition.

After being gifted five free tickets from her work back in Germany, she attended her first event on a whim, inviting her father and his partner.  Unaware of the price and exclusivity of the tickets, she gave the remaining two away at the door “We had no idea how valuable they were,” she said. New to the world of Oktoberfest, she was blown away by the vibrant and energetic atmosphere of the festival. “It was absolutely crazy,” she said “Everyone was standing on the benches and dancing on the tables. It was chaotic but the most fun I’ve ever had”.

This was back in 2008 when Frederieke was 26. Now more than a decade later, Frederieke, has taken up residence in Australia after a temporary vacation travelling across the East Coast became slightly more permanent than she initially intended. She attributes her decision to the “warm weather, laid-back culture and fantastic variety of international cuisine” that Australia has to offer. Needing employment, she drew on her background and began working as a casual at The Bavarian Broadbeach. She remained in the position for two years before relocating to The Bavarian Eagle Street Pier in Brisbane. There, she began to work up the ranks, sing her background to bond with customers and give them an authentic taste of Germany. “I love getting dressed up in my dirndl and showing off my culture,” she said. “There’s such a fun vibe in the restaurant, everyone’s having a good time”. Frederieke’s favourite item on the menu, the Bavarian’s one litre stein, is the biggest crowd-pleaser. “I love being able to walk out to a table with a huge tray and see everyone’s jaw drop”.

With more than five Oktoberfests under her belt, Frederieke is proud to celebrate her culture alongside her Australian friends and looks forward to doing so again this year. 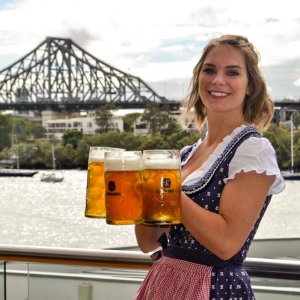 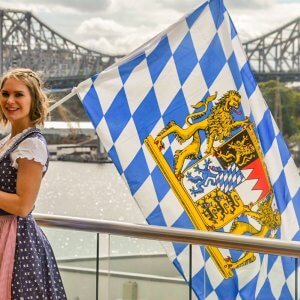 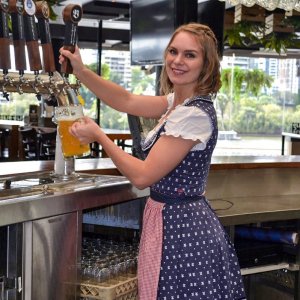 Words by Jennifer Anne Muirhead
Images via The Bavarian