The Portia Geach Memorial Award is Australia’s most prestigious art prize for portraiture by women artists. Established in 1961 by the bequest of Florence Kate Geach the prize honours her sister, artist Portia Geach. Portia started her career in Melbourne, where she grew to become an award winning designer and painter, and was the first Australian to be awarded a travelling scholarship to study at the Royal Academy of Arts in London.

Among the finalists this year are Pam Tippett and Michelle Hiscock. Pam Tippett’s chosen subject is distinguished actor and musician, John Waters. Pam had come to know about him from his various global performances both on and off screen. “When the opportunity arose to paint John for a community event in Southern Highlands where we both live, I was very pleased. It was a chance to not only paint someone with an interesting face and relaxed physical presence,” she says. “He proved to be an entertaining sitter, with great stories from his acting and musical experiences an interesting and varies life.”

Like Pam, Michelle Hiscock’s chosen subject was a familiar face on screens and in magazines Kate Fitzpatrick. However, Michelle found the process of painting Kate challenging.”The ideal actor’s face is a broad, smooth surface without too many peculiarities; an elusive mask on which light and shade produce a kaleidoscope of different moods but which at the same time maintains an appealing and striking sculptural form,” she says. “Which Kate was I attempting to paint, the glamorous images of her from my youth which seemed to hover in front of her like a diaphanous veil, or the woman, very close to my mother’s age who has hurried over to my studio unadorned – or some composite suffused with memory?”

The Portia Geach Memorial Award aims to ensure that women artists in Australia are given equal opportunities and are encouraged and supported in their endeavours. The exhibition featuring all finalists will be on display at the S.H. Ervin Gallery from 12 October to 2 December. 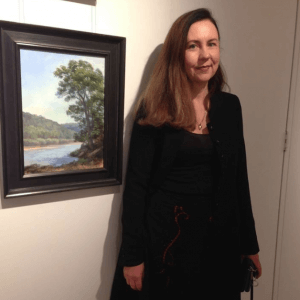 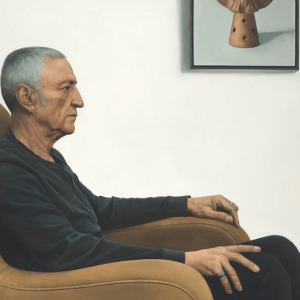 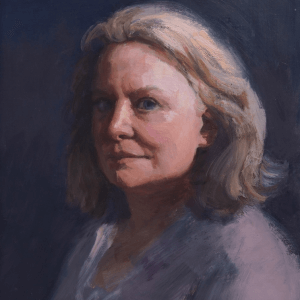